The number of point-of-sale terminals worldwide accepting contactless cards shot up 41% in 2017, the most recent year for which data was available, to reach 40.9 million, according to RBR Research, a London-based firm. That represents 42% of all payment terminals, the firm says. 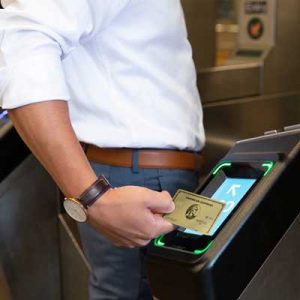 Rapid growth also is expected on the card-issuance side. The number of contactless cards globally will reach 10.7 billion, or 57% of all cards, by 2023, RBR forecasts. That contrasts with 5.25 billion cards in 2017, or 35% of all cards that year. That works out to a 12% average annual growth rate over the six-year span, RBR says.

Still, until recently at least contactless accounted for a relatively low share of worldwide card payments. While the number of contactless payments grew 88% in 2017, that still came to just 11% of all card payments, according to RBR.

The research firm sees the cards replacing cash for low-value payments. Mandates in certain regions also account for some of the growth, it says. In China, which RBR calls the “world’s largest contactless market,” issuers are including chips and contactless technology in response to a central-bank requirement. And in Europe, rules from Visa Inc. and Mastercard Inc. require all terminals to have contactless capability by 2020.

But merchants, particularly those that sell low-value goods such as snack items, also are encouraging contactless usage, RBR says. To promote contactless, ads by these outlets emphasize rapid checkout, the firm adds.

“Contactless issuance and usage will grow strongly as consumers and merchants see the benefits of the technology in terms of speed and convenience,” said Daniel Dawson, who led RBR’s research, in a statement. “As contactless cards become a part of everyday life across the globe, their acceptance and use will become the norm in the vast majority of countries.”