Continental Aims at a 20% Expansion of Its Kiosk Network

Already the second-largest deployer of electronic ticketing machines at airports, Continental Airlines Inc. plans to add another 150 units this year, including some at international destinations. The first airline to deploy self-service ticketing kiosks nine years ago, Continental now has 779 online at 130 domestic airports, trailing only Delta Air Lines, which has 860. Driving the expansion will be the airline's first foreign installations as well as the need to handle increasing transaction volume on domestic kiosks. Traffic on the machines is expected to continue to build as the carrier adds new features this year, including the ability to re-issue tickets for standby and other purposes. It also plans to expand the number of units available to customers who book reservations on the airline's Web site and want to use an airport kiosk to check bags. The international deployment will start with tests at airports the airline serves in Canada, Mexico, and the Caribbean. The first Canadian airport to receive Continental machines will likely be Toronto, and the first in Mexico will likely be Mexico City. The exact number of units to be deployed has not yet been determined, but the carrier has a policy of installing at least two machines in each airport it equips. The foreign deployments will start in the fourth quarter. In the second quarter, the airline's machines will begin allowing passengers booked on international flights to check in. Currently, the carriers' machines process 1.5 million to 1.8 million passengers per month, or about 70% of passengers with e-tickets. Another 5% of passengers check in on the airline's Web site, a number the company plans to increase to at least 25% this year, in part by dedicating some airport kiosks to process baggage drops for Internet customers. “We're recreating the supermarket express lane (at airports),” says Scott O'Leary, senior manager of e-services programs at Continental. 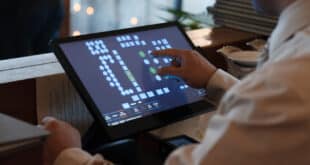