The 7-year-old startup Affirm Inc. has already signed up more than 2,000 merchants to accept its instant-financing option, but on Wednesday it announced it had bagged the biggest one of all: Walmart Inc.

In a move that extends Affirm to the physical point of sale in a major way, users will be able to check out with the service at more than 4,000 of Walmart’s U.S. stores, Affirm said. The option will also be available on Walmart’s e-commerce site “over the coming weeks,” according to Affirm’s announcement.

“We are focused on providing customers transparent, easy, and convenient ways to pay, and offering Affirm both in stores and online is one way to do that,” said Daniel Eckert, senior vice president of Walmart services and digital acceleration, in a statement. 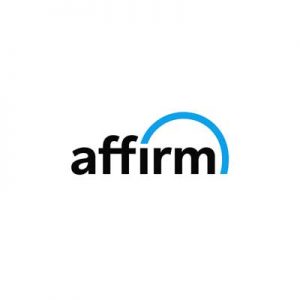 Affirm allows approved users to repay purchase amounts with monthly installments over three, six, or 12 months. The service charges interest but displays it in terms of actual dollars rather than as percentages. In stores, users receive a barcode on their mobile device to scan after choosing the Affirm option at the point of sale. Affirm pays merchants in full, less a transaction fee. Loans are made by Cross River Bank, Teaneck, N.J.

Purchases are limited to a range of $150 to $2,000, and the option will not be available at Walmart stores in Iowa, West Virginia, and Puerto Rico. Affirm is also ruling out transactions involving alcohol, tobacco, groceries, pharmacy and personal-care items, firearms, and money-services.

“Affirm and Walmart have done their homework on consumer credit preferences and know that certain segments of the population instinctively prefer the simplicity and payment discipline an installment loan provides, coupled with an approval process that does not involve the person they’re engaging with at the checkout counter,” says Leslie Parrish, a senior analyst at Aite Group, a Boston-based financial-services consultancy, in an email message.

Walmart, which in 2016 launched its own mobile-payment app called Walmart Pay, has already introduced Affirm at its Allswell and Hayneedle brands. Now, the financing option will be available at the sprawling parent chain, giving a big boost not only to Affirm but to the concept of immediate financing at the point of sale. A number of competing payment methods, including Klarna, also offer point-of-sale financing.

“With this announcement, Affirm is poised to rapidly expand their reach from primarily online retailers to storefronts, and it’s doing so at significant scale,” says Parrish. “Now that Affirm has this infrastructure in place, it will be an attractive option for other brick-and-mortar retailers seeking an alternative to credit cards as a financing option.”

For now, San Francisco-based Affirm appears happy enough to focus on mining its Walmart opportunity. “I’m looking forward to introducing Walmart customers to a modern and innovative way to buy the things they need,” said Max Levchin, the company’s founder and chief executive, in a statement. Levchin is also known as one of the founders of what is now PayPal Holdings Inc.