In reporting its performance for the fourth quarter of 2018 as well as the full year, PayPal Holdings Inc. indicated its dependence on former owner eBay Inc. is down, Venmo monetization is up, and active accounts are surging. Meanwhile, the San Jose, Calif.-based company said it is entering a potentially huge new transaction market through a deal with Charlotte, N.C.-based bill-payment processor Paymentus Corp.

Indeed, PayPal officials exuded an air of confidence as they talked about the company’s recent track record Wednesday in a conference call with stock analysts. “We aspire to be the de facto operating system for mobile and digital payments across the world,” said PayPal chief executive Dan Schulman as he led off management’s discussion.

There was much to be confident about. PayPal notched $4.23 billion in revenue for 2018’s final quarter, which, as Schulman pointed out, represents the first time the company has exceeded $4 billion in a single quarter. That was up 13% year-over-year. Full-year revenue came to $15.45 billion, up 18% over 2017. 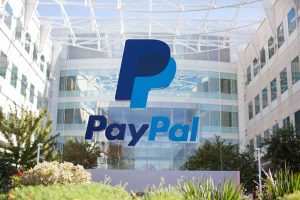 Active accounts totaled 267 million, up by 38.7 million for the year, and Schulman expects to add at least another 33 million this year to bring the number to 300 million. Payment volume for the year climbed 27% to $578 billion on 9.9 billion transactions, a 27% increase.

PayPal reached these numbers despite eBay’s decision a year ago to demote the payment provider’s role from overall processor to just another payment choice on the big marketplace. EBay began operating its new, so-called managed-payments platform in September, and on Tuesday announced some 3,500 sellers had migrated to it by year’s end at an average 25% discount to PayPal’s published transaction fees.

Schulman fired back Wednesday, pointing out that eBay is accounting for less volume relative to other, similar e-commerce platforms PayPal works with, such as Etsy, Grubhub, and Pinterest. “Clearly, Marketplaces is slowing down for them,” he noted, adding that eBay accounted for “zero growth” for PayPal in the fourth quarter. “We’re able to absorb that because of the breadth of our portfolio.”

The ebbing of eBay for PayPal also seems to be accelerating. “Volume is leaving eBay,” Schulman told the analysts. “EBay is going to be a much smaller part of our business than any of us thought it would be” by the end of PayPal’s operating agreement with the marketplace, which arrives next year.

PayPal is finding alternative sources of transactions and revenue. One such is the agreement with Paymentus, which PayPal chief operating officer Bill Ready said will offer the potential of “tens of billions” of dollars in bill-payment volume.

Another promising market lies in person-to-person payments, where PayPal’s Venmo service racked up $19 billion in volume for the quarter and $62 billion for the year. All told, P2P volume including both Venmo and PayPal P2P totaled $139 billion in 2018.

The knock on Venmo has been that it’s free to users, so costs ratchet up with volume with no compensating revenue. But Schulman said the service ended the year with a $200-million “run rate” in annual revenue as it began tapping acceptance fees from both online and physical merchants and also took in fees from consumers for instant transfers. Indeed, Venmo is “getting into everyday spend,” said Ready, through the Venmo card and Pay with Venmo programs.

All told, some 29% of Venmo users made a “monetizable” transaction last year, said Schulman. But, in response to a question from an analyst, chief financial officer John Rainey cautioned Venmo “is not in the black yet.” The first step, he said, was to stop the growth in losses as volume grew. “We’ve done that,” he added, and now, “the second step is to break even.”

In other results, PayPal’s total payment volume for the quarter came to $163.6 billion, up 23% year-over-year. Payment transactions totaled 2.9 billion, up 28%. Net new active accounts added totaled 13.8 million, compared to 8.7 million a year ago, with 2.9 million of the new accounts coming from two key acquisitions in 2018, those of European point-of-sale provider iZettle AB and U.S. payments provider Hyperwallet. Mobile continues to be key, accounting for $67 billion in volume in the quarter, up 40% year-over-year, and accounting for 41% of total volume.

Everybody knows the U.S. retail arena is changing, but a new report from Checkout.com reveals …