With Its New Installment-Payment APIs, Visa Enters a Crowded But Enticing Market

Visa Inc. said on Thursday it is getting into the point-of-sale installment-payment business weeks after rival Mastercard Inc. announced it bought Austin, Texas-based POS credit fintech Vyze Inc. The move also comes as volumes are growing for the product, driven in part by offerings from non-banks like Affirm Inc. and PayPal Holdings Inc.

The new offering from Visa will become available in January and includes application programming interfaces that will link to Visa issuers and let merchants offer consumers using Visa cards at checkout the option to pay for purchases in equal portions over a number of months. The service will be available in stores, online, and overseas, Visa said. “Consumers still want to finance major purchases, but they prefer to do so with the simplicity and discipline an installment loan provides,” says Leslie Parrish, a senior analyst at Aite Group, a Boston-based consultancy, in an email message. “They especially like the fact that there is a set end date at which they will have fully paid off the purchase.”

The APIs, among the first products available in Visa’s software storehouse called Visa Next, are expected to ease checkout and allow merchants to offer an installment option with pre-approved Visa cardholders. They will allow issuers “to leverage an existing payment account consumers already have and are familiar with, instead of asking them to submit to a credit check, download an app, or open another line of credit,” said Sam Shrauger, senior vice president and global head of issuer and consumer solutions at Visa, in a statement. 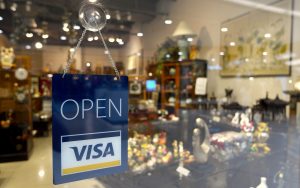 The network said it will pilot the new service with a variety of providers around the world. One such partner is Visa’s own CyberSource unit, which will support the installment-payment capability for both merchant and acquirer clients, Visa said.

Visa is getting into a growing but increasingly crowded market. Figures it cited Thursday indicate installment payments worldwide amounted to $1.2 trillion in 2017 and are growing at a 15% annual rate, double the rate for credit card payment volume. At the same time, a widening variety of fintech firms have already jumped on the opportunity, including Affirm, which in February clinched a deal with Walmart Inc.

PayPal has been in the business for more than a decade following its 2008 acquisition of a startup called BillMeLater, which offered credit options to buyers at online sites. The service is now called PayPal Credit but still focuses on e-commerce. Rival Klarna, a Swedish company that established a base in the U.S. market in 2016, also specializes in installment options for online purchases.

In April, Mastercard acquired Vyze, whose technology allows merchants to offer at the point of sale installment-payment options from a wide range of creditors. The system is designed to flip through the options quickly, allowing consumers to make their choice without holding up the line. Terms of the deal were not announced.

Indeed, the invasion of non-bank technology companies has been such that by last year they controlled 38% of the U.S. personal-loan market by volume, up from just 5% in 2013, according to TransUnion, a credit-reporting company. “Affirm and other leading point-of-sale financing providers have rapidly gained market share, so it makes sense for Visa to provide others with a way to enter this market,” says Aite’s Parrish.

Given this background, Visa clearly has large ambitions for its new APIs. “We expect installments to become a foundational method of payment at checkout for both domestic and cross-border commerce payment transactions,” said Shrauger.

It’s Official: NCR Succeeds In Its Bid to Acquire Cardtronics in a $2.5-Billion Deal