EMV Chargebacks Proving To Be a Card-Present Merchant Problem

Hiccups in the U.S. payment card industry’s monumental shift to EMV chip card technology are beginning to surface, and one problematic area is chargebacks among card-present merchants.

That’s the observation from one large merchant-services provider, and it’s corroborated by a recent report from First Annapolis Consulting Inc. containing similar accounts from other acquirers.

“We saw a noticeable rise in chargebacks following the conversion,” Jeff Stocki, vice president of operations at Troy, Mich.-based North American Bancard, tells Digital Transactions News. “It wasn’t just around the EMV reason code, but across the board.”

Chargebacks for card-present transactions increased 50% following the Oct. 1 EMV liability shift, he says. Overall chargeback volume across the more than 250,000 merchants in NAB’s portfolio increased 15%. “We expected some,” Stocki says, “but we expected it would be limited to the EMV category.”

Though the exact reason for the surge is uncertain, Stocki’s suspicion is issuers are using the EMV reason code when processing chargebacks. What’s unusual is that, when chargebacks processed by issuers increase, there typically is a corresponding increase in retrieval requests, which consumers initiate after spotting a potentially erroneous charge on a card statement. That has not been happening recently.

“It’s very unusual to see them move opposite of each other,” he says. “I have never seen that before.”

Why is this happening? It may be because some consumers have realized that a transaction on an EMV card at a merchant that can’t process the chip puts the liability on the merchant, he says. Even that is odd because a number of the chargebacks have been for such minor transactions as food delivery and, in one instance, a $1.99 purchase at a discount store, Stocki says.

In some cases, merchants that know the customer whose card had the chargeback have asked about why the customer initiated the dispute and are told the customer didn’t. Why that happens, Stocki doesn’t know for sure. “It’s curious behavior,” he says. He doesn’t discount cardholder deception, sometimes called friendly fraud

It’s merchants that Stocki is most concerned about, especially those like a Chinese restaurant or dollar store that isn’t used to dealing with chargebacks and paying the accompanying fees. “Our ultimate concern is with the tremendous growth in card-present chargebacks that merchants who have never been exposed to the chargeback system are now being negatively impacted by accepted payment cards,” he says.

Should this issue grow, Stocki fears losing a generation of merchants from the payment card ecosystem. “They’re going to decide it’s not worth it to pay these fees.”

North American Bancard has discussed the issue with the card brands, which manage the chargeback system but leave the actual implementation to their issuers, but “their responses have not been confidence-inspiring,” Stocki says. “They told us everybody knows about the rules for EMV chargebacks and if merchants want to avoid EMV chargebacks they need an EMV [point-of-sale] terminal.”

Acknowledging that the rules were designed to encourage merchant adoption of EMV-acceptance technology, Stocki is concerned over the potential abuse of the chargeback system and the potential loss of merchants “who instead of moving to EMV-capable solutions, will leave the payment card ecosystem altogether. There needs to be a balance in how we treat the merchant and the cardholders.”

The card brands say they continue to work with merchants on EMV.

“Overall, chargeback rates in the U.S. have been consistent year over year,” Catherine Murchie, senior vice president of North American Enterprise Solutions at MasterCard Inc., says via email. “What we see now is a short-term effect on both merchants and issuers as the market migrates to chip and adopts the EMV standard. This is similar to what other markets experienced as they adopted chip. Ultimately, the U.S. migration will reduce counterfeit fraud in the long run and will bring the U.S. in line with other markets.”

American Express Co. says it continues to work with merchants on EMV adoption.

“Thus, all chargebacks related to the EMV liability shift are new to merchants,” she says in an email. “The objective of the liability shift is to incent the ecosystem to invest in security improvements. To gain liability protection, merchants and issuers must adopt chip technology. The chargeback process is the way in which the issuer recovers the losses.”

With that said, Ericksen advises merchants that aren’t ready to adopt EMV acceptance to read and compare the last four digits of the card number with the ones appearing on the receipt for suspicious transactions. “If they don’t match, employees should ask for another form of payment,” he says. 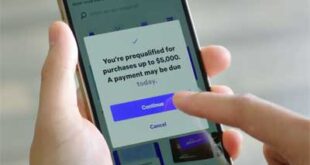 Checkout.com To Acquire ID Firm ubble and other Digital Transactions News briefs from 5/12/22

Payments provider Checkout.com has agreed to acquire ubble, a provider of identity-verification technology, in a transaction set …